skip to main | skip to sidebar

The woman's lips spread into a big, wide smile as she holds the plate of cookies out to my 7-year-old son. He looks away from the cookies, then at me with those pleading eyes that say please, please make this moment disappear, Mama! “Thank you, but he can't eat wheat. It was nice of you to offer.”

“No, we're actually totally gluten free, which means no wheat-related grains, including spelt, rye, barley, etc. And in our case even oats are a no-go. Basically the only grains we eat are rice, corn and quinoa.”

“Lots of soy substitutes, then?”

“No; he's allergic to soy.” Her eyes search mine, looking for the Way Out sign, and I begin to wish I hadn't mentioned it. “Soy, eggs and pinto beans.” Her eyes appear to go blank. There is a long pause, while I contemplate changing the subject.

“That doesn't leave much. What do you eat?”

“Oh we eat lots of things! Even bread! I just bake everything myself, and read every package. Soy is in pretty much everything. And we just don't eat out.”

The look of pity on her face is far harder to bear than our family's food-experience. This is our life. We're used to it! But sometimes we just want to feel normal. Sometimes I just want to walk into a restaurant empty-handed and buy my kids a sandwich. And I know we're far from the only family in our community that has this experience. So I've decided that things are going to change. And I'm going to document the adventure.

First adventure: MikSa on Bowen Island. We took the kids for dinner there... and brought along NO supplemental food! We challenged the restaurant with our needs, and they delivered. Let me tell you about our evening. It was dark and wet. I don't mean that in the way winter on Bowen is always dark and wet; I mean we came in drenched and dripping from a thick squall on Government Rd. We hung our coats in the back of the restaurant, and settled into a quiet table in the corner.

MikSa is like a gingham napkin folded into an elegant crane; it somehow manages to be both homely and exotic. Dim, romantic lighting falls on red diner stools; elegant-looking synthetic orchids smile innocently from the tables, as if unaware of their artifice, and glasses clink and sparkle pleasingly above the bar, reflecting the hockey game on TV. Pat Quinn's talking face flashes in ever-decreasing arcs of blue and peach. Serving gorgeous, creative dishes with a humble attitude, the restaurant's unpretentious feel makes the slightly-above-average prices seem reasonable. Nobody's pretending the flowers are real. But the food is good.

This is starting to sound like a sports bar, but that would not do it justice. MikSa inhabits the premises of Bowen's historic coffee-bar/grocery store, the BowMart, and somehow keeps a uniquely Bowen feel about it. The painted steps up to the porch are reminiscent of the building's beach-cabin history, and it's definitely a locals-restaurant. Oh. And chef Nagy wears a baseball cap with his chef's jacket. 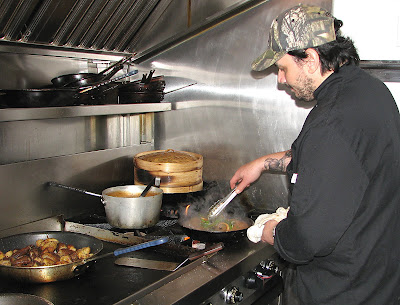 I have to be straight up about this: any chef who comes out to personally discuss my kids' food requirements with me is going to have a return visit from us. Chef Michael Nagy did exactly that, and tailored the dishes he served us to suit all of our needs. As a busy mother with a list of no-can-do's in the food department, I really appreciate someone who will work hard to get it right for me. We had a great assortment of interesting and tasty foods. We loved the beautifully-arranged beef stew, and the giant salad, to share. But the absolute favourites all around were the chili-garlic prawns and the tuna tataki. No surprise, I guess; apparently chef Nagy specializes in Asian foods. And every meal we had was beautiful. As somebody who routinely destroys the layout of a not-quite-what-we-wanted restaurant meal by adding our own gluten/soy-free additions, I found it very nice to have a meal brought to me that needed no additions, was wholly edible for my children, and was presented with care and grace. 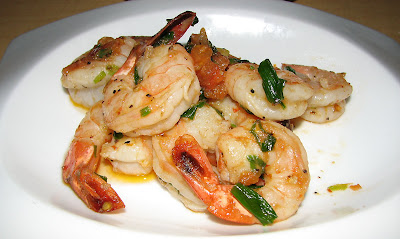 It's nice to feel looked after. Period. And that is the homeliness of MikSa, defined. While we were there, there was an adults-only birthday party going on, some quiet dinners-for-two, and our own sometimes-rambunctious family meal, complete with utensils on the floor and an under-the-table groaning sulk from the 5-year-old faction. And in this place we were attentively served, never rushed, and well-fed. 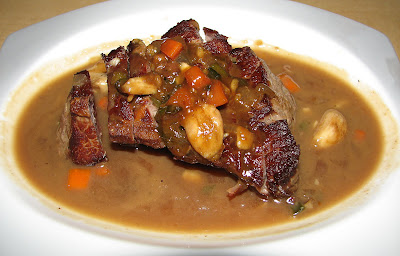 I haven't eaten a squirrel, yet (or killed one), and it's going to be colossally hard, if I do it. I've had some experience having to kill animals, mostly for humanitarian reasons (like my mink-ravaged pet duck this past Monday). It's always horrible. There is nothing I can say that can convey the way one's heart closes doors in a hurry to let the body do what personal ethics demand.

It's my conviction that I must live honestly, and I don't feel like buying meat on Styrofoam trays is honest. It's just a way of blinding ourselves to the death and often inhumane lives that happened for our tongues' pleasure. So we try to buy "ethical meat" -- but who's to define "ethical"? I struggle a lot with the ethics of diet. That includes most veggies, grains and fruits. Most of it is definitely environmentally unethical. So I guess it's all about where we draw the line.

I grew up in a family that raised meat rabbits, and, while I never had to kill one, I did slaughter many. Chickens, too. It was definitely one of the best things about my childhood; not because it was pleasurable, but because I learned so much about biology, ecology, humanity, nutrition and "ethics" that no classroom experience could ever have taught me. I fed the rabbits we had to eat, and despite my parents' dire warnings, I loved them. Many dinners were accompanied by a deep emotional pain -- realization of the sacrifice on my plate. It was impossible not to love the animals I had cared for.

It was impossible not to love the calves at the auction, who sucked on our teenage-fingers with abandon and trust, and then were sold for meat, or a lifetime of dairy servitude. I loved cheeseburgers.

It was impossible not to love the baby rat who showed up on our doorstep last year, traumatized and temporarily paralyzed, while its parents chewed through the rat-proof compost bin to get at the remnants of our human excess, and shat all over the apples I'd stored in the pantry. I researched and created rat-formula, nursing him back to health through long nights with a dropper before releasing the recovered animal to a fate of certain death in Crippen Park.

Sometimes my compassion is faulty, but I never know when.

So here we are with two highly compassionate children, who love sausages and meat-on-bone. What to do? I'm trying to teach them the way I learned when I was young, here on the same property. I want them not just to love the taste of meat, but to honour and cherish -- with all the grief that is also implied in that -- the life that was taken for our dinner plates. I never want us to eat ignorantly, but always with integrity of mind. We are part of a cycle of life, and I would hate to inhabit this tiny piece of the whole unknowingly.

Wild meat would seem ethical, but not in the face of mass environmental destruction, brought on by humans. This destruction includes the introduction of invasive species, both plant and animal, to the detriment of local populations and, ultimately, of global diversity and sustainability. I don't want to further tax those populations. So just "wild" is not good enough. "Invasive" would be much better.

Still... that leaves the problem of actually killing them. We started with slugs, and so far that is as far as we've come. It is very very sad to watch a hated invasive; taker of banana slug habitat and destroyer of all my gardening attempts, writhe and wither in boiling water as it dies, and then to think that that life given for my enjoyment amounted to only one small bite; part of an hors d'oeuvre. It's pretty shameful, in the context of ethical meat, and sacrifice honoured.

We tried to raise ducks for eggs, but first we discovered my son's egg-allergy, and then the ducks were killed by the mink. We thought we might raise ducklings for meat, but since the mink-incident, and having to put a beloved pet out of her misery, that is indefinitely on hold.

It was impossible not to love the wide-eyed mink, so desperate for food that it tried to take my dead ducks from my hand, so when I nearly trapped it with a bucket I was afraid to hurt it, and let go... It was only doing what it was born to do.

Eat invasive Grey squirrels? They're cute and fuzzy, eat 100% of our edible nut species, and have driven the Douglas squirrels out of the area, entirely. I would like to think they're ethical meat. I hope so. I tried to save a Douglas squirrel when I was a teenager. I found it half-paralyzed, lying in the woods near Collins lane. It died despite my efforts, and probably I prolonged its suffering, for my inability to kill it. There is no animal (or, some say, plant or stone) that does not have a soul, and that cannot merit love or affection. I don't feel I have the right to kill anything -- and yet sometimes I feel I'm obliged.

Somehow we all have to sort out our place in the physical world, and it's different for all of us. This is where I'm at, right now.
Posted by Emily at 12:20 AM No comments:

This is so embarrassing. I feel so dreadful for my kids, but thankfully they haven't faced any teasing from their friends about it. We now keep a poop chart in the bathroom.

The idea is that if we're aware of their output, we can start experimenting with the input. That is, we're planning to start introducing those forbidden grains, as the doctor suggested back in June. I just want to be sure we notice if something goes awry.

So the chart is basically 3 columns: one for the date, and one for each child's poop-observations. When they poop, they write AM or PM and a particular symbol to describe the sort of bowel movement they experienced. They're generally quite good about it -- sometimes a little over-creative in the diagrams they make, and sometimes they forget to write anything at all. But this has been enlightening for us.

Rhiannon has diarrhea more often than not. Hmmm.

She's already gluten-free, and for the most part soy, egg, and pinto-bean free, as well. I am not looking forward to paying another $400.00 to have her tested for allergies. So for now this is just an observation and we'll continue to watch and see how it goes. I'm not as worried about her. Taliesin dropped from 99th to 15th percentile, before we went gluten free, and has had growth-issues, ever since. But Rhiannon has always been tall and robust -- somewhere in the 95th percentile-range. She's happy and healthy. So whatever is going on with her poop is not of such concern to us, right now.

Sometimes I wonder if all the hoopla about Taliesin's diet is part of the reason he's not physically thriving. So we try to be as relaxed as possible about it, having fun with food and trying very hard to keep the issues stress-free.
Posted by Emily at 11:31 AM No comments:

Newer Posts Older Posts Home
Subscribe to: Posts (Atom)
One family's adventures in seeking to eat sustainably, healthfully, with passion and with compassion... all gluten-free, soy-free, egg-free, and pinto-bean-free!