skip to main | skip to sidebar

Ginger just spent a couple of gluten free months in India, and brought us home an idli tree! I had never even heard of idli, before, but we've tried it out three times, already, and we love it! Well... Tali only likes them sweet, but we hope he'll adapt.

We've made idli with whole lentils (not peeled and halved, as the recipes say) and whole rice. First I soaked them for 12 hours, then I blended them up with fresh water. Then I let them ferment for another 12 or so hours... and TA DA! whole-grain idli! Add a little salt, make some sambhar and masala chai, and presto we have a delicious meal. I must say, the whole grain idli are definitely tinged a greenish-grey, unlike the pure white perfect pillows that are traditional idli, but we don't care. They're flavourful and healthy. The meal was so good that Markus asked what the occasion was!

Here it is, cooking: 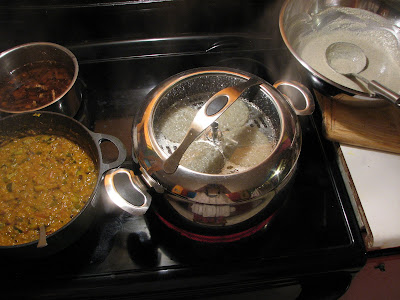 Then, after a couple times making this wholegrain idli, we tried some with the same base, but with cinnamon and sugar mixed in. I served them for dessert one day with some homemade sweet lemon sauce (boil milk with lemon juice, salt, and honey, until it becomes thick and creamy, then strain it through a tea-towel, like making hangop). The dessert was wonderful, though the idli were a little gooey -- I guess that's what comes of experimenting!
Posted by Emily at 10:37 PM No comments:

Spring is here, but you wouldn't know it from this blog... yes, the crocuses are blooming, the trees are full of buds, spring is even earlier than usual... and the wild food family is quiet. It's not as if there is no wild food available right now... I'm just not finding the time to report on it (or even gather much of it).

So no, this blog is not defunct -- just not a priority right now, since I'm concentrating on the preparation for my upcoming art show (http://mama-art.blogspot.com).

Food plans for this year:
That last one sounds like a step in the wrong direction, but really it's just opening time and space for some of the other projects.

Happy spring!!
Posted by Emily at 6:04 PM No comments:

Newer Posts Older Posts Home
Subscribe to: Posts (Atom)
One family's adventures in seeking to eat sustainably, healthfully, with passion and with compassion... all gluten-free, soy-free, egg-free, and pinto-bean-free!